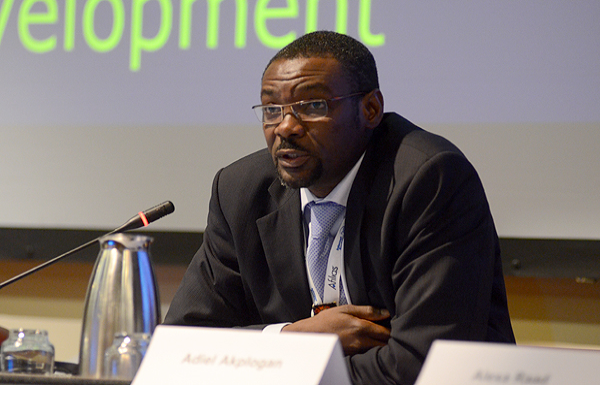 LOS ANGELES – 27 September 2019 – Today, Adiel Akplogan joined the elite ranks of notable individuals who have been inducted into the Internet Hall of Fame for their significant contributions to the advancement of the global Internet. The Internet Hall of Fame inducted Akplogan, the Vice President of Technical Engagement at ICANN org, for his outstanding contribution to the Internet’s growth, reach, and security in Africa. ICANN President and CEO Göran Marby said, “Adiel is the embodiment of ICANN’s mission to work in the public interest. I know everyone at ICANN wishes Adiel congratulations on this significant achievement.”

Akplogan will be honored at the Internet Hall of Fame 2019 Induction Ceremony today in San Jose, Costa Rica at 23:30 UTC or 16:30 PT. The ceremony can be viewed via livestream: https://livestream.com/internetsociety/ihof2019.

Akplogan has been with ICANN’s Office of the Chief Technology Officer since 2015, where he develops and coordinates ICANN org’s technical engagement. David Conrad, ICANN’s Chief Technology Officer, said, “Adiel is key to our outreach and engagement efforts with the Internet’s technical community. This recognition is well-deserved and is a testament to his dedication and contributions to the ICANN community.”

Recognized as an Internet pioneer in Africa, Akplogan contributed to technical capacity-building and the deployment of some of the first private Internet Service Providers in Africa. He helped found and was the first CEO of the African Network Information Centre (AFRINIC). Akplogan said, “We dreamed and worked relentlessly to build a regional registry that would become a catalyst for the African Internet ecosystem, tackling our challenges one at a time with diligence, discipline, and courage to build consensus.”

During his 25-year career, he has also served on the Boards and Advisory Committees of many multistakeholder Internet governance bodies. He has also contributed to building the technical coordination bodies in Africa such as the African Network Operators Group (AfNOG), the Africa Top Level Domains Organization (AFTLD), and the Africa Internet Summit. Akplogan, a native of Togo now living in Montréal, Canada, holds an engineering degree from the Université d’Abomey-Calavi and a master’s degree in E-Business and New Technology Management from the Paris Graduate School of Management.

ICANN’s mission is to help ensure a stable, secure, and unified global Internet. To reach another person on the Internet, you need to type an address – a name or a number – into your computer or other device. That address must be unique so computers know where to find each other. ICANN helps coordinate and support these unique identifiers across the world. ICANN was formed in 1998 as a not-for-profit public-benefit corporation with a community of participants from all over the world.

About the Internet Hall of Fame

Health / knacks to get rid of hiccups