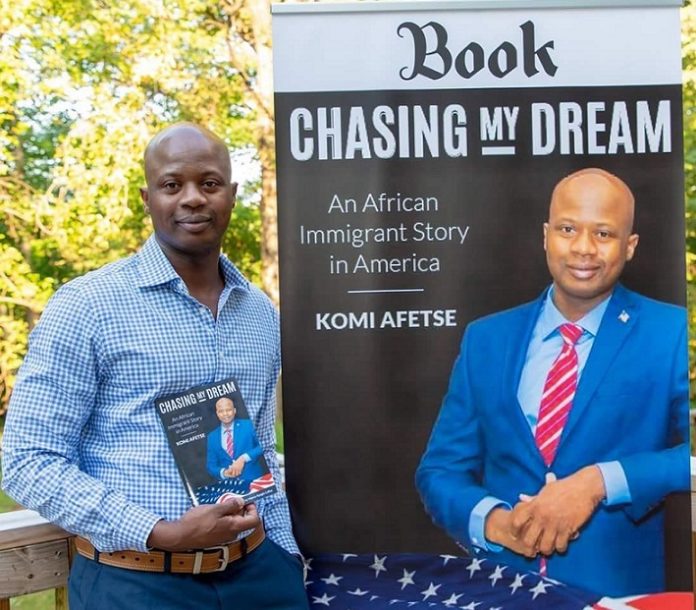 Subject treated and its context

Summary of the book

What would you do if you travelled to a new country and found yourself in jail the first night? How do you deal with language barriers, not knowing the right people, and limited education? “Chasing my Dream: An African Immigrant Story in America” is a story of courage, resilience and perseverance in the face of life challenges.

In this book Komi Afetse talks about his early years in Togo, West Africa, his adjustments to America, his life of service as a U.S. Army Officer, and how he went from earning minimum wage to become financially independent in fourteen years. He shared many life principles that helped him overcome adversities and achieved personal success. The same life principles will help you regardless of who you are or where you are from.

“Chasing my Dream: An African Immigrant Story in America” is an incredible story that will inspire you to go the extra mile in the search of your desired life.

Presentation of the book

Edited by Ascendant Press, this book has 156 pages and 12 Chapters.

Where to find the book?

Born in Togo, a country in West Africa, Komi Afetse left his homeland in search of a better life in the United States of America in March, 2004. After a very difficult start in the United States, he joined the army and became a naturalized U.S. citizen in August, 2011. He later graduated from North Carolina A&T State University in Greensboro with a bachelor’s degree in international relations.

As a civil affairs and psychological operation non-commissioned officer, he was deployed in Djibouti (Horn of Africa) between 2014 and 2015 in support of a U.S. Government mission in that region. He later earned his commission as an officer in the U.S. Army Reserve. He is currently a serving as U.S. Army Reserve Officer and works as Database Systems Engineer for the U.S. Department of Defense in Washington, D.C.  Komi Afetse’s remarkable life story is part of a bigger story that is “The American Dream.” This is the story of hard work, perseverance, resilience, faith, and determination. Komi Afetse joined the army at the lowest enlisted rank, with no college degree, and quickly rose to become an officer.

When he came to the United States, Komi could not even spell his own name in English, and his journey to personal success and financial independence is a testimony to his determination, his daring, and his trust in this incredible country’s principles and opportunities. Author of many essays on self-development, self-motivation, goal-setting, and inspirational living, Komi is a motivational speaker and a founder of human development consulting company Afetse Consulting International. He is a world traveler and public advocate for successful living.