Environmentalist by day, bartender by night: An entrepreneur driven by passion 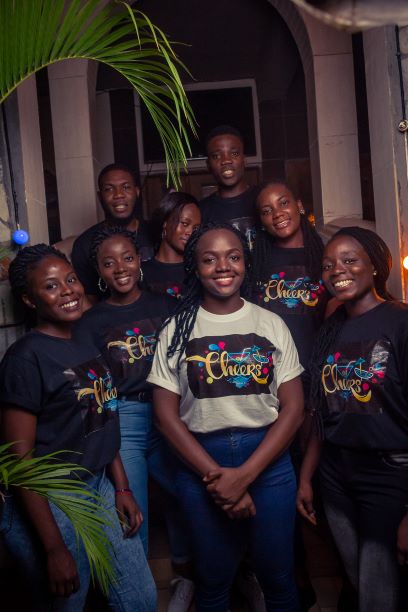 A young dynamic entrepreneur, Inès Akue Gedu spoke to us on how she discovered and embraced her passion for mixology, in the process of finding her feet after school.

It is not uncommon to see people juggle two jobs so they can make the highest possible revenue. Neither is it hard to come by stories of people falling back on their given-talents or default skills when their education certificates do not seem to land them that dream job.
Without any of these reasons as a premise, Inès embodies those two characters: She is the project manager of a recycling company and owns a mobile cocktail bar.

Background
Subsequent to completing a high school curriculum in science, she scanned through the many possibilities that were available to her and thought a university program that would offer her an impactful career as an environmentalist in the long-term would be exciting. So she went for a Bachelor of Science degree in Environment and Development studies at Central University (Ghana) and the pinnacle of the four-year experience, was graduating with high scores.
Whilst at it, she never shelved the passion of mixing drinks to make great-tasting cocktails, a passion she will fully explore later on.

«Real life starts after university» they say
Daydreaming about finding a space in the top echelon of an industry related to one’s field of study is an intrinsic part of living the university life.

Unfortunately or interestingly, reality sets in when the degree is bagged and finding desired opportunities becomes a herculean task.
Inès too had her fair share of that. Initially, she was ushered into a research firm as an intern for a year then she decided to move back to Togo.
She walks into a new job, making her first steps in a professional career whilst nurturing, at the back of her mind, the idea of making something out of the passion she discovered earlier. But to begin with, she inevitably had to refine that raw passion into sharpened skills.

Discovering the passion
When asked the question about where it all began, it is in an unruffled voice tone ̶ a reflection of her calm persona ̶ that she points to her penchant for experimenting with drinks. « I am really adventurous when it comes to taste. I really like trying new fruits, new drinks and I am not the kind that will go to a bar or a restaurant and order for a coke (or) just a standard drink. »

Her way of life on campus would come in handy too, as she suggested whilst answering further. «And in school, we used to have Friday moments amongst friends, girls (coming together) in our rooms, we don’t go out, just sitting there sipping on drinks, having food and I would just try one or two stuff, mixing drinks I have on my hand and it came out well, they started loving it »

Autodidactic
The 21st century, arguably, is one that has churned out the greatest number of people charting career paths without having to necessarily sit in a formal training setting but rather learning from a screen via the internet. Inès is one of those and she is everything but shy to admit it.

«Nobody taught me how to mix drinks, I was just watching videos online. The first cocktails that I made were out of my mind. Then later on when I decided to start my business I felt my inspiration was great but I needed some basics that I can also transfer to other people, to my team, because they will have to work with me and I will have to teach them. So I went for a short course online, learning the basics. But basically I was not really trained. »

The start: translating passion into a business

She named the bar Cheers by Inoos.

At the heart of the decision to make the bar a mobile one, were a number of factors: the willingness to bring some freshness and innovation to the market, not wanting to have a permanent location due to the financial exigencies that go along with it and bearing in mind there was already a job at hand.

«I wanted something very dynamic, very flexible» she zealously let out. Maybe, an indication of the energy, reminiscing on the beginning of her business, puts into her.

The milestone event, however, was a launch at a lounge bar that got her business en route and effectively provided her a platform to show what she has got to offer and the peculiarities of her cocktails: Notably, Fruit juices made naturally out of freshly squeezed and blended fruits.

She vividly recollects how overwhelming it was handling many orders at a time and how that experience became crucial in her anxiety management. At the said launch, she would get her first client as well.

As she recounted her hesitation in taking the offer from the first client, looking back on how stressful the launch was, she went on to share what makes the business keep the ball rolling. «An event will bring up another event, then those who will come for that event will also be interested and invite us to another one. And it goes on»

Solid support system
Starting a journey in unchartered waters can be a tall order and can take a toll on whoever is in it if it culminates into failure. For Inès, the family was there, to not only provide a guarantee of a rescue she can fall on if things turn out unfavorably but more importantly to provide her spring to help her jump as high as she could. «It was something new to my mum but she was in support … My sisters, brothers, my loved one (laughs) really helped me emotionally, financially and I am really grateful for having them». Furthermore, she added they act as agents in landing her contracts.

Juggling two jobs
« Aargh! » She exclaimed whilst repeating the question. And that expression of emotion suffices to gauge the level of energy two jobs take out of her, doesn’t it? But she went further to explain «That’s the difficult part of it, truth be told, truth be told». Yes, she said that twice.

Obviously being a project manager is a big deal already and it doesn’t get any softer when you have to run a cocktail bar in parallel with it. Seemingly, she has the formula to balance the equation nevertheless.
« (As a project manager) I am doing a job that is demanding mentally, that really absorbs energy in terms of brainstorming. When I am running my business I don’t take it as another big work. When I am planning, meeting clients, making menus or discussing upcoming events with my team, it is pleasure. I take it as having a good time. And thankfully it’s all coming together »

Going forward, she hopes to take her business to the next level by birthing a lot of innovative ideas.

Let’s save Richard’s life together

#Don’tRushChallenge – The geniuses behind the music